New: Saturation Mixing Ratio is the ratio of moisture to dry air in a parcel of air at the point of saturation. This is essentially the mixing ratio at which the parcel condenses.

New: Mixing Ratio is the ratio of moisture to dry air in a current parcel of air.

New: Relative humidity is the ratio of the mixing ratio to the saturation mixing ratio (how close a particular parcel is to its point of saturation in terms of percent).

Extended: Extended knowledge of practical use of Bayesian mathematics for probability-based computations.

New: Understood use of Taylor Series approximations in showing difference between adjacent pixels is a reasonable approximation for the gradient of the image surrounding that point. 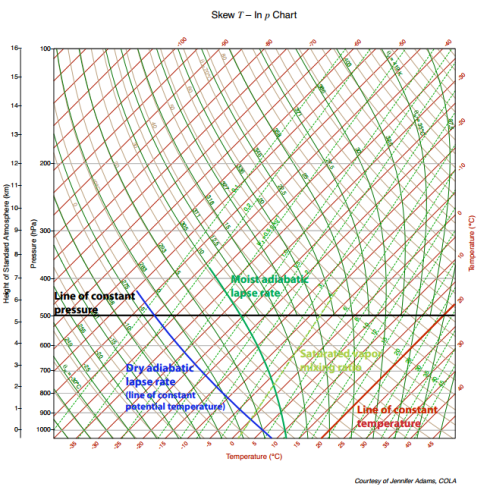 New: I learned how to read wind barbs. These are graphical representations of wind direction and magnitude given in a short-hand form.

New: I learned the meaning of the term isotherm and isobar.

New: I learned of the location of NOAA-based Skew-T diagrams and I learned how to read them (for the most part).

New: The GRAIL mission is a mission taking place around the moon that’s comprised of two separate satellites. The mission’s goal is to map out the gravitational contour of the moon by leveraging a KA (part of the microwave region of the EM spectrum) -band emitter whose sensitivity is so great it can be used to determine relative displacement of the two satellites down to approximately one micrometer (the size of a human red blood cell). As the satellites orbit the moon, displacement is monitored and the relative gravitational effects are noted; lending to an understanding of the internal makeup of the moon.

Extended:  An ordinary least squares approach to solving the best-fit of a 2D line on a standard Cartesian coordinate system can be viewed in two discrete ways. The first, which I’ve always known, is to treat the task as an optimization problem whereby each individual point is plugged into a 1 degree polynomial as such:

In this particular system, and using the least-squares approach, we’re trying to solve for an x and b which minimize the squared error of each point’s polynomial. This means

, or to find the values m and b which minimize the residual.

This is done by computing the sum (as above), and taking the partial derivative of the sum of the polynomials with respect to each variable, so where

Where the optimal equation is expressed by

However, another way to view the problem is as a covariance

of the x and y variables over the variance of x.

New: The precise definitions of mean and variance depend on whether we are talking about the mean of a probability mass or density function.

New: For a probability mass function, where the units are discrete, the mean is simply

. For a continuous function (a probability density function), we are required to integrate the function to retrieve any notion of probability; so we leverage

It can be noted that mean is the expected value of the distribution.

New: Variance is similar in that you need to know for which type of distribution you’re computing. In the discrete sense, it is simply the

, again the continuous (density) form is the integral:

. The computation makes sense when all values of x across the distribution are used in the equations.

New: Instability is one of the primary recipes for a thunderstorm. Its defined by how readily a discrete parcel of air is displaced from its current place and continues as opposed to return to normal. The dynamcis appear to be the result of colder air above warmer air, resulting in raising parcels to be less likely to fall back down as a result of warmer ambient air.

New: Heat transfer between air molecules is low, and so a discrete parcel of air will cool and warm more as a result of the thermodynamics of air pressure than the ambient air temperature. This means that parcels of air will cool at a rather constant rate as an adiabatic process. The adiabatic lapse rate, then, is the rate at which the air cools as it raises through the atmosphere due to changes in its internal pressure. As a corollary, once the parcel of air reaches a particular altitude it will condense, thereby adding water to the mixture: creating a lower adiabatic rate. Therefore, there are two adiabatic rates: dry and saturated.

New: Due to the adiabatic lapse rate (see above), a parcel of air will cool at a relatively fixed rate.  If the ambient air at a particular altitude is cool, then the buoyancy of the air parcel will be high; giving the parcel a higher tendency to raise. This higher tendency translates into massive columns of air (thunderheads) and strong updrafts within the column; the end result being strong downdrafts as the air cools to a point where it returns to earth in addition to frozen water ice (hail), etc. This whole dynamic is what starts a thunderstorm.

Reminded: A weighted average has a very simple function

New: A thermal is the term given to a rising column of air that lacks the moisture necessary to form a cumulonimbus.

New: I learned how to use a plunger snake today to clean out nasty fiance hair from the sink.

New: the debugger API by Microsoft does not support finding the arguments to methods very easily. Its possible it does, nut it is very difficult to find out how.

New: As strange as it sounds, it appears as though nobody is completely sure how adhesives work. The standing theory thus far is that Van der Waal forces are at work. Interesting.

New: A compiland is a file or other “single unit” of program code. I had never heard this term used before.

New:  Tropo is a prefix used to mean “turning or change”.

New:  The troposphere is a region of the atmosphere extending from 6-11 miles above the surface of the earth. As distance between the surface increases, the temperature drops. At a certain point one reaches the tropopause; the temperature then begins to increase slightly.

New: Land is able to heat air approximately 5-times more effectively than water; which is why land-mass is so crucial in global-weather systems.

New: A probability density is the ratio of volume (see above) to mass (see above).

New: Fomalhaut (a star visible in our night sky) has a massive ring of comets around it; so massive, in fact, that thousands likely impact with one another each day. Source: http://www.space.com/15255-comet-massacre-fomalhaut-star.html.

New: It’s possible life may have been found on Mars after all.